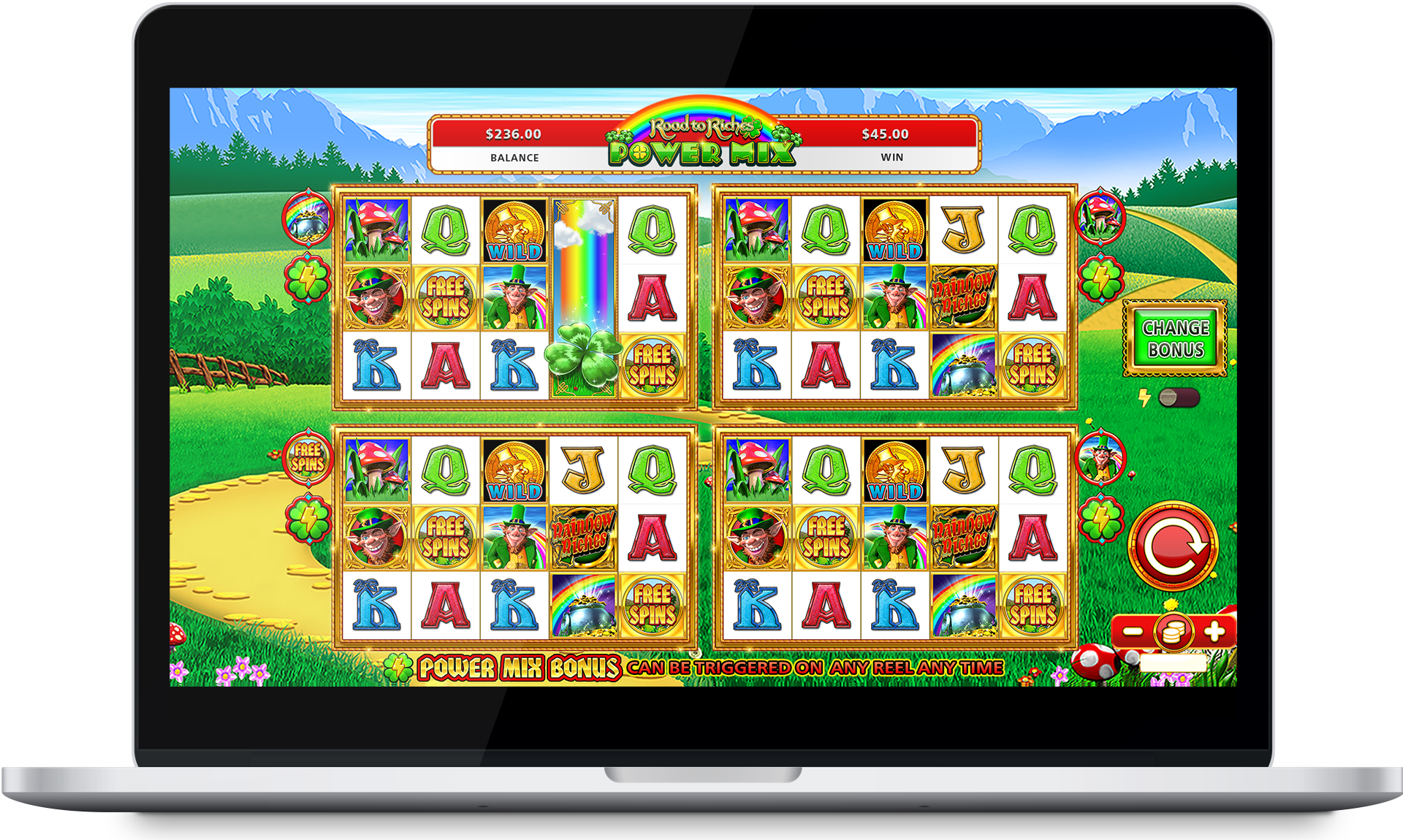 SG Digital’s Rainbow Riches remains hugely popular with players, particularly in the UK where it has earned a cult status within the casino community.

For the studio’s product development team, evolving the brand within an ever-changing marketplace is vital. In 2021, the company released Rainbow Riches Race Day, a sports-themed slot that was inspired by the classic horse racing arcade machines and opened the franchise to a new audience.

SG Digital has since followed up with the launch of two new Rainbow Riches titles. Cash Cluster marks a new e-Instant game that incorporates the famous leprechaun, while Power Mix signals the studio’s entry into the “quad-reel” genre, allowing players to enjoy four different reel sets at the same time.

We spoke with Rob Procter, VP Game Development at SG Digital, to learn more about the latest instalments from the Rainbow Riches family and how introducing new mechanics helps breathe fresh life into an iconic theme.

Rainbow Riches Cash Cluster is the latest e-Instant game to be released by SG Digital in recent times, what was the thinking behind developing a Rainbow Riches branded title for this particular vertical?

We’re gathering pace in the e-Instants environment. Of course, Scientific Games has a proud heritage within the lottery sector and it’s an area of our portfolio that we’re expanding too.In recent months and continuing into 2022, we want to be more innovative in how we approach new e-Instant games. Speaking to our partners, there’s a clear demand for these types of games and they see the benefit of them when used in a particular way. We have a clear strategy in how we will build the future of this type of genre, rather than standing still. Utilising the Rainbow Riches franchise demonstrates how seriously we’re taking this vertical.

Is there growing demand from online casinos and bingo operators for e-Instants?

Absolutely, but it’s about educating operators on how best to utilise these games within their offering to maximise the potential. As a business we understand that promoting e-Instant titles in the same way as a new slot game doesn’t provide an efficient return on investment. However, using a game as part of a promotion or acquisition tool can generate strong results. Some operators have identified how these games can work as a cross-sell technique from bingo to casino. There’s an opportunity to present players with a brand or game theme that they wouldn’t necessarily try themselves but at a lower cost point.

How does the development process differ to creating an e-Instant game compared to a slot? Is it easier, quicker, more complex?

There are certain aspects which are easier, such as developing the math model as it is less complex than a slot. Similarly the engine build process is often shorter. Approaching the front-end design is exactly the same, as we want quality graphics and sounds across all our content, regardless of its format.

One area we’re looking to improve and streamline when it comes to e-Instants is how we build our game families. The best providers in this space have the ability to create a base game or mechanic that resonates with players and build families of content from that. That’s not to say they reskin a title, it’s about expanding a brand and identity with new versions. We’re already looking at new variants of Rainbow Riches Cash Cluster for 2022. They will all have slightly different elements to

them, but the brand will be consistent throughout. That will help us with our speed to market and frequency in new e-Instant game releases.

With Rainbow Riches Power Mix, can you talk us through the gameplay and how the four reel grid works exactly?

Rainbow Riches Power Mix is SG Digital’s first foray into the quad-reel format. It’s been an area of slot provision that we’ve been keen to explore and have recognised the success of these types of games in the marketplace. Rainbow Riches fits the format perfectly in our view. We originally wanted to create a completely new game theme for our first quad game, but following further discussions we identified Rainbow Riches and in particular its range of bonus features as the best way to enter this new game genre.

Rainbow Riches Pick’n’Mix is one of our most successful releases from the iconic franchise and so we adapted the bonus features in that game into Power Mix, with the addition of a new Super feature, where all four reels combine and players have the chance to collect cash multipliers with some massive modifiers.

Other suppliers have experimented with the four reel grids previously, what makes this version different?

When we were layering in the bonus elements of Rainbow Riches Pick’n’Mix, we knew there was scope to do things differently to other types of quad-reel games that are already available. As with the original Pick’n’Mix gameplay, players still have control over the gameplay and choose which bonus rounds they want to play with. They can opt to have the same bonus in each of the four slot windows or choose a different combination. Deciding how the Power Mix game is constructed is likely to resonate well with UK players and in particular those who currently enjoy Rainbow Riches Pick’n’Mix.

The more successful quad games in our industry have been those which step away from the same mechanic across the four slots. Players are looking for an elevated experience with this genre and want to see how they can interact differently across each game field. That’s what we set out to achieve with Rainbow Riches Power Mix.

Is there a growing appetite for these types of games from players?

UK operators have really taken to this genre and nearly all of our top tier partners will be launching the game on the first day of its official release. We have the added benefit of the game launching in the lead up to Christmas, which is traditionally a busy period of engagement for players as they look for entertaining experiences online. Customer feedback has been important too. We’re always listening to what our operator partners have to say about the types of games that are performing well, as well as ways in which they want to see Rainbow Riches evolve.

With auto play functionality being removed from the UK market, these games will become increasingly popular as they offer more entertainment on a screen within a single spin. From our perspective, it offers an enhanced and safe gaming experience, while also being within the realms of new regulation. Clear messaging is crucial as well, given how the mechanics can differ across the four reels. That was a really important aspect in developing Power Mix as we understand the need to educate players who are new to these types of games.

The popularity of the Rainbow Riches franchise shows no signs of slowing down, is there a temptation to update the graphics/features or does its cult status restrict how you can change the brand’s identity?

There’s two ways of looking at this. In one way we don’t want to venture away from what made Rainbow Riches so popular in the first place and lose its core player base. We once updated the graphics and look of the iconic leprechaun and that didn’t go down too well with players! We want to stay loyal to the brand and what players love about it. But also, we can’t stand still and not evolve the franchise.

Everyday we’re thinking about how we can keep the brand alive and offer a new Rainbow Riches experience that be of interest to players. Without tampering too much with the front-end that players appreciate, we can still push the boundaries. There’s nothing to say every Rainbow Riches game has to be a 3×5 slot – we’ve proven that with Cash Cluster and Power Mix, as well as the previous Megaways version.

What else can we expect from the Rainbow Riches franchise in 2022?

We’re at the early stages of developing a very UK-centric Rainbow Riches game. All I can say at this stage is that it utilises a mechanic that’s already popular with UK players but has never been incorporated into the brand previously.

Ultimately, it’s on us to keep thinking outside the box and imagining new ways to take the concept forward. We are fully committed to accelerating Rainbow Riches further and introducing new mechanics to the gameplay over the coming years.