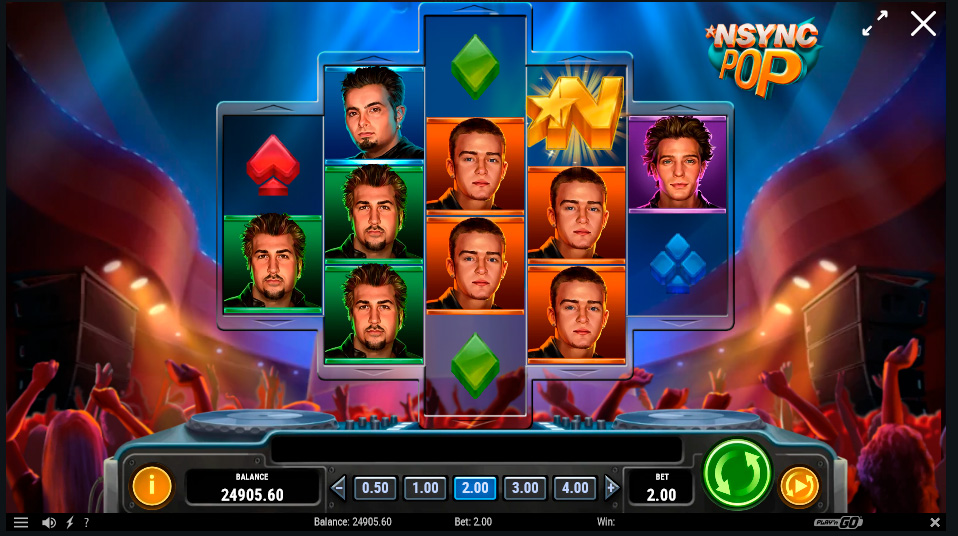 Fans of the ‘90s get your frosted tips and baggy cargos at the ready as *NSYNC are back to perform once again. Join Justin, JC, Lance, Joey and Chris onstage in this musical title.

With rock bands like Twisted Sister, KISS, Alice Cooper and many more in their repertoire, Play’n GO have shifted their focus to pop in this dynamic title. Set in an unusual 2,3,4,3,2 grid layout in the base game, this slot cleverly combines nostalgic aesthetics with contemporary features.

The action takes place in the Free Spins feature with the objective of expanding the reels, which only happens in the Encore Spin feature. Pop Symbols appear on the top and the bottom of the reels, with every ‘Pop’ a Mystery symbol is revealed. The aim is to clear the grid in the Free Spins feature of all the Pop symbols to take the player to the Encore Spin feature.

Members of the band appear on the reels and are united as they act as the Wild symbol which fans of the band will be pleased to see.

Justin, Lance, JC, Joey and Chris come together once more.

One of the biggest boybands to dance onto our screens in the ‘90s, even though they’ve gone their separate ways, NSYNC are still bringing Pop to our ears.