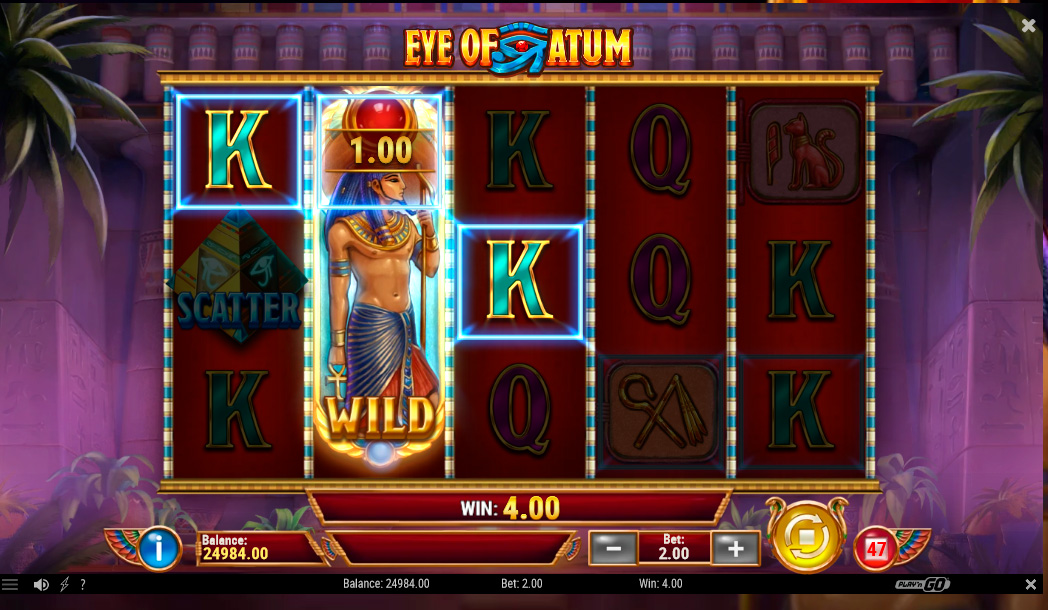 Dare you travel to ancient times where the lands of Egypt were ruled by mighty gods?

Atum harnesses unimaginable power. Are you worthy of his fortune?

A five by three reel slot sees ten pay lines with the ‘Creator God’ Atum serving as a Wild. Should Atum land on reels two, three or four, he will expand to cover the entire reel. Atum lands on the reels and expands across the entire reel, a gold glow highlights the feature’s end.

Let’s move on to symbol upgrades. The game designers have taken inspiration from Egyptian Mythology to influence their symbol choice. Symbols that are in the forefront make their way back to the reels. During the Free Spins, the Expanding Wilds are still active. For every Expanded Wild that lands, Atum will grant players a symbol upgrade until they reach their goal. The Eye of Atum. Want to know something cool? With each upgrade the chance of landing an upgraded symbol increases.

There are plenty of other ways players can gain Free Spins. Landing a Wild will grant one Free Spin, two Wilds means an extra three spins and three Wilds an additional five spins.

Said to be one of the manifestations of the sun and creator god. He was identified with the setting sun.

Play’n GO might have a reputation for creating big, lumbering Egypt slots, but Eye of Atum isn’t exactly one of them. The 2,000x potential isn’t great, though it has been matched with a fairly volatile math model, rated as 7 out of 10. Since Eye of Atum comes in several configurations, keep an eye out for RTP, which tops out at 96.2% in the default setting. Playable on both desktop and handheld devices, bets vary from 10 p/c to £/€100.

Played on a 5×3, 10 payline game grid, players score a win when matching symbols land left to right from the first reel. Low pays include J-A card royals, while high pays are made up of five fairly common icons of Ancient Egypt you find in slots. Hitting a five of a kind win consisting of low-value symbols will get you a payout worth 10x the bet, rising to 20 to 50 times the stake for a winning line of five premium symbols. Wilds land on reels 2, 3, or 4 and expand when they land to cover all positions on their reel. The wild’s first duty is to replace any paying symbols to help complete winning lines.