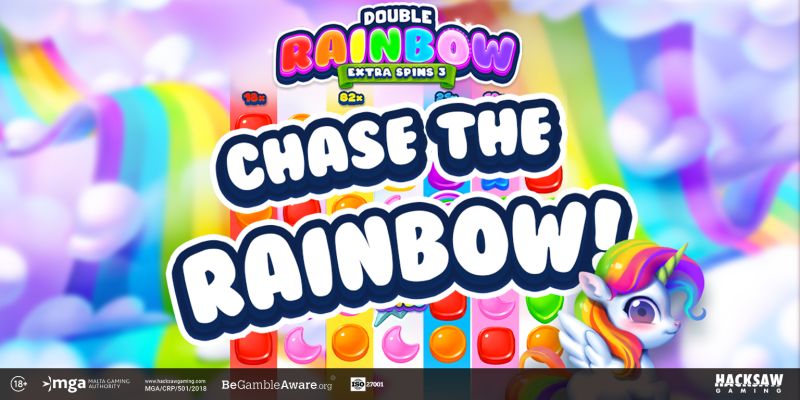 This bright and colourful 7×6 grid slot will give players the opportunity to hit a max win of 5000x! Activate colored reels, multipliers and collect extra spins by landing Clouds on each reel and ultimately unlocking a Full Rainbow🌈!

The game’s math model isn’t quite so delicate, though its 3 out of 5 volatility rating means it’s not one of Hacksaw’s heavy hitters either. RTP varies quite widely, from a high of 96.38% to as low as 88.38%, jurisdiction dependent, so it is worth verifying before firing up. With two bonus buy options on offer, RTP does change when activating them, increasing to 96.41% for buy option one, dropping to 96.27% for buy option 2. Regular stakes range from 10 p/c to £/€100 while the gaming is available on any device.

Double Rainbow uses a cluster pays system, which triggers the cascades feature when winning clusters hit. Forming a winning cluster occurs when at least five matching symbols land in horizontal or vertically adjacent spaces. Seven candy looking objects take the place of the regular pay symbols, and all of them have the same value. Hitting a five-symbol cluster is worth 0.1x the bet, rising to 50x the bet for clusters consisting of 15+ symbols.

If you manage to activate all 7 reels, the Full Rainbow feature is triggered. When this occurs, all seven reel multipliers are multiplied by x2, x3, x4, x5, or x10. Moreover, +5 additional spins are also awarded where all activated reels remain active.